As the chaos continues around the cancellation of Roe v. Wade by the United States Supreme Court, the states have become a free-for-all of right-wing conservatives who figuratively jump on each other in their attempts to become the state with the most absurd restrictive interpretation of women’s constitutional rights. In their enthusiasm, they may well trample on the First Amendment rights of the press, whose role is that of a watchdog of democracy.

These zealous state legislators are not working in a vacuum. They work from the new Model Law of the National Right to Life Committee (NRLC).

This “model” now appears not only to be aimed at suppressing women’s reproductive freedom over their own bodies (and as recently happened in Ohio, advocating forcing a victimized 10-year-old child to have a baby), but it targets websites that “promote” abortion. We emphasize that this is part of a long history of speech suppression – including media coverage – that focuses on marginalized people in the United States.

The question: what does it mean for a website to “encourage” abortion?

The NRLC’s new model anti-abortion legislation could put anyone who publishes work online, including journalists who cover abortion and women’s health issues, in the legal crosshairs. The NRLC’s first model anti-abortion law is already in place in Nebraska. The NRLC posted its new model language online, then took it down after the media began reporting the obvious threat. (It is available here courtesy of the Wayback Machine)

The NRLC model legislation would subject individuals to criminal and civil penalties for “aiding or abetting” an abortion, including “hosting or maintaining a website, or providing an Internet service, that encourages or facilitates efforts to obtain an illegal abortion”. It seems squarely targeted at anyone providing what we once called knowledge and supporting an informed audience.

Apparently ignorance is a desired outcome of the NRLC? Or is it just a check? 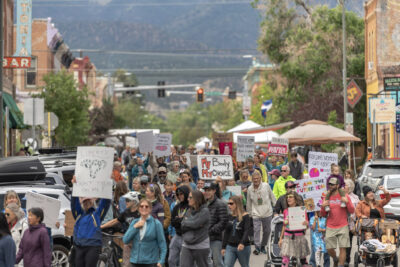 The fact is that there is no indication in the “document” as to how narrowly or broadly this model law would be interpreted. As Prism Reports pointed out, there are many questions for which there are no answers:

“Does it cover an article on how medical abortion is accessible by mail or report the medical consensus that it is safe? How about a story about opening a new abortion clinic, or the work of abortion care clinicians, advocates, and doulas? Is it too “encouraging” for a website to simply remind readers that despite the leaked Supreme Court draft decision in Dobbs v. Whole Women’s Health, abortion remains legal and people are free to keep their appointments?

If this is the case, then even journalists from trusted news organizations could be threatened by law, harassed and monitored simply in the course of their work; fight misinformation and provide readers with up-to-date, in-depth, factual information that reflects the state of the nation and helps women find their place within it.

So of course, it’s no coincidence that the NRLC seems ready to attack the information infrastructure around abortion, including media coverage. It is redundant to point out that news coverage is information and information is power.

Such attacks are not new – in the 19th century, Congress passed a “gag law” preventing abolitionists from petitioning against slavery. The secessionist states in the south have gone a step further; making it illegal to utter a word of anti-slavery speech in the Confederacy. Even publishers in “free” states have faced physical threats, had their offices burned down and their presses destroyed. (Investigative journalist Ida B. Wells, who became one of the founders of the National Association for the Advancement of Colored People, reported on post-Civil War civil rights injustices and launched an anti-lynching campaign, was regularly threatened.)

Just as became common in the 19th century, the attack on First Amendment rights – freedom of speech and freedom of the press – is not just verbal intimidation, it is physical violence. . It can show up more in states where the NRLC model abortion criminalization laws are shaping up to be the most extreme, or it can show up anywhere.

Even today, it is clear that laws against speech are part of a systemic approach that emboldens violence against the groups they target. For the past several years, the State of Florida has been a leader in anti-gay, anti-LGBTQ, and “anti-CRT” (critical race theory or any discussion of racial injustice) racism and racism. not so veiled against blacks and blacks. brown teachers. That they added language that threatens women’s right to control health care decisions for their own bodies should come as no surprise.

Now, with a law specifically targeting speech related to abortion, the risks could be serious. Why? Because so many of the journalists at the forefront of reporting on reproductive rights and justice are women of color. They point out that scientific data reveals the much higher risks of maternal and child mortality in their communities. They are already being disproportionately harassed because they are telling you the truth.

Childbirth in this country is dangerous; especially if you are a poor minority in a state that forces you to have a baby while denying you access to even minimal health care provided by the Affordable Care Act. Especially if you are still a child and you are a child victim of rape and incest,

As a result of the decision, the confusion leads to delays and denials of some life-saving pregnancy care. As reported this weekend The Washington Postmiscarriages, ectopic pregnancies and other common complications are now under scrutiny, putting maternal health at risk.

Deliberately vague legislation prohibits “encouraging[ing] access to abortion,” which could mean just about anything, and that’s the point. It’s a matter of control. With laws like these, the cruelty and vagueness are intentional – to allow each state, sheriff, or Republican-controlled court to apply its own interpretation, which could trap the media in legal quagmires (that’s is why we take responsibility for media insurance).

Silence – for us in the media – is not an option. There are not two sides here – there is only the truth.

Lobby group calls for boycott of The Crown ahead of premiere

Hours before the long-awaited premiere of the Netflix blockbuster’s final season The crown finally falls, …